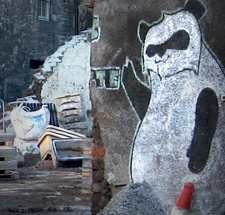 The gallery shows a selection of photographs taken during the construction of the extension taken from the News section where we feature the progress of the build from start to finish.

At the beginning of 2004 and working with Gareth Hoskins Architects, plans were developed to purchase and demolish three derelict industrial buildings on the site adjacent to the Kirk House and develop the space. The Grassmarket Mission contributed to the funding for the £1.4m project and on March 15th 2011 the contractors moved in and work started on clearing the site. After an archaeological inspection of the site the build proper began on 27th February 2012. The building work was completed and handed over in March 2013 and was officially opened by John Swinney MSP in April that year.

The extension, which includes a community hall, cookery facilities and classrooms will allow the Grassmarket Community Project to continue its work and develop the services it provides with the hall and classrooms expected to provide a vital source of revenue. You can revisit the progress of the build on our News pages.